Enjoy the Manila Bulletin Digital Edition on your tablet, smartphone or laptop!

The Manila Bulletin is the Nation's Leading Newspaper and the most convenient, complete and cost-effective way to read your favorite magazines anytime and anywhere. The Manila Bulletin Digital Edition is a replica of the printed newspaper, with all the stories, photos and artwork intact. The easy-to-use interface lets you flip leisurely through the pages like a newspaper, or conduct custom searches and share articles.

The Manila Bulletin Digital Editions are available to all users, but in order to enhance your reading experience, please register. Registration is quick and easy, and it enables you to take full advantage of our features.

Read stories in your news feed on one device and pick up where you left off on another. Subscribe and authorize up to five devices with one account. 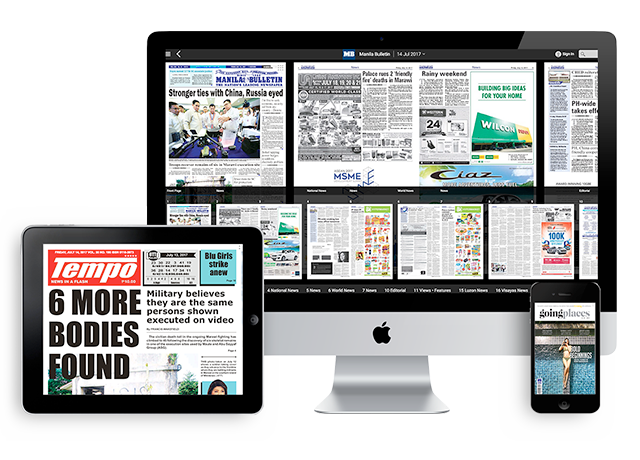 Your favourite newspaper packaged just the way you want it!

Take a look at our features

The Manila Bulletin Digital Edition is full of interactive features to engage and delight news lovers. Familiarize yourself with each one of them and enjoy the benefits of an enhanced news consuming experience.

On-demand narration is a great feature for users who like to listen to their magazine while multitasking or who are visually impaired.

Save articles for future reference. Using our tool you’re able to create as many Collections of stories as you like.

Download your digital edition on mobile device and read it anywhere.

Yesterday’s paper or other back issues are just a click away.

Our new tool offers instant translation in up multiple languages for most articles and even full publications.

Receive an email alert as soon as the current issue of your favourite publication is available.

The Manila Bulletin continues to flourish in the last 115 years with its partnerships with governments, businesses, shareholders, and varied stakeholders. It is the second oldest newspaper published in the Philippines and the second oldest English newspaper in the Far East.

It has lived up to its reputation as “exponent of Philippine progress” through fair and accurate news and features and in keeping the public fully informed during the most difficult and trying times.

From being a shipping journal that published advertisements of shipping companies in its early years, the Manila Bulletin became a chronicler of news and inspiring stories about every Filipino – the youth and toddlers, the elderly, the farmers and fisher folks, the religious and socio-civic groups, and eminent world figures who made it into the news.

The Manila Bulletin is the pioneer in taking the first giant steps to become the only broadsheet to utilize an integrated approach to a multi-level platform. Thus, it prides itself in not just being a newspaper but more so in being a multi-media company. harnessing the power of technology to keep its readeres and the market fully informed.

The Manila Bulletin adapts and thrives in the ever-widening digital universe and is now present in every platform, from print, online, mobile, LED billboards, and in every screen: from desktop, laptop, tablet, smartphone, and even watches.