Looking back, he has always been interested in plants and nature, which sprung from his experiences in his mother’s garden. He says, “I remember taking care of my mother’s garden and I would always bring in the potted plants to decorate the house. I’d occasionally swap them with the other plants outside or when the leaves start to wilt.” KEEPING THE PASSION ALIVE As he entered adulthood, he didn’t stop tending plants, continuing the hobby when he began living on his own in Makati. He cultivated various fruits in his apartment’s limited space, including longan, lanzones, avocado, caimito or star apple, and durian, among others. When he and his wife started their own family in 2011, they decided to move into a new home, and one of the things that topped their list when buying their house was garden space. The Ticsays ended up buying a house with a backyard, which he then turned into a flourishing garden. “The garden went through different transformations, but in 2017, we decided to stop taking care of the grass and convert the lawn into a forest by starting to plant my potted fruit trees on the ground,” said Ticsay. He initially planted fruit-bearing trees including bananas, sampaloc, and atis. But as his knowledge in gardening develops, he thought of improving his urban garden by not just nurturing fruit-bearing trees, but planting fast-growing fruits and vegetables for his family’s consumption as well. He explained, “I realized that it usually takes five to seven years before a tree bears fruit and I didn’t know the secret of grafted fruit trees back then. So last year, I started making raised beds and decided to try and grow food for my family.” His garden is also home to several native and non-fruit bearing trees like dapdap (Erythrina variegata), talisay (Terminalia catappa), alibangbang (Bauhinia malabarica), botong (Barringtonia asiatica), alagau-gubat ( Premna nauseosa), mabolo ( Diospyros blancoi), and acacia, among others. He says, “The trees have different ages, but the majority are still young like two to three years old. I wanted to focus on Philippine native trees to showcase them, to create awareness, and to support the planting of native trees.” He calls his home garden“Green thumb thumping ,” which was inspired by a famous ‘90s song “Tubthumping” by Chumbawamba that talks about the resilience of ordinary people. To date, he grows malunggay, eggplant, camote tops, alugbati, spinach, lettuce, luya, okra, ampalaya, sweet potatoes, and some garden herbs. HARVESTING AT HOME Presently, the produce that he gets from the garden is mostly for the family’s consumption, but he also sells surplus bananas (lagkitan variety) to their neighbors and friends. Ticsay said, “It’s the lagkitan variety that we don’t usually see here in Manila. I got a plant sapling from our farm stay at The Weekend Farmer in Cavite last year.” He sells them for P90 per kilo and he was able to dispose of 12 kilos of bananas this August. Ticsay uses the money that he earns from the bananas to buy new seeds for the next growing season. This gardener also makes sure to use natural farming methods in gardening to save money. This includes reusing their household wastes through composting and vermicomposting. “We use our fruits and veggie scraps as ‘green composting materials,’ which go to the bin together with ‘brown materials’ like paper bags, carton boxes, dried leaves, egg shells, and shredded paper. I also do ‘chop and drop’ where I place most of the tree and plant cuttings at the foot of the trees for mulching and enriching the soil.” FIVE ZONES OF HIS GARDEN Ticsay is also learning about permaculture design online and he applies them to his urban garden. He planned his 80sqm backyard garden and divided them into different zones: Zone 1 is for herbs and the kitchen greens, Zone 2 is for veggies and root crops that take longer maturity time, Zone 3 is where flowers and vines are fostered, Zone 4 is his so-called “food forest” where shrubs as well as fruit and flowering trees are planted and lastly, Zone 5 is an area for bonsai and his nursery. In planning the garden, he explained, “I have been studying permaculture lately and trying to apply its principles and techniques in an urban setting. I tried to make zone planning where the elements that needed regular attention and care are closest to the doorways or kitchen or in a big setting or farms that should be closest to the house. Those veggies or crops that you will usually need as well in everyday cooking.” As a parent, Ticsay also influences his kids into being interested in gardening by engaging them in activities like watering the plants, repurposing materials to make pots, trimming and pruning plants, transplanting seedlings, and harvesting the veggies that they’ll eat afterward. He makes things fun for them by incorporating their favorite dishes into gardening. For instance, his son Milo loves sinigang and is also an okra lover, so he gives him tasks like checking and harvesting okras every day. As an urban gardener who still explores planting different crops, Ticsay also faces challenges like failed seed germination, inability to handle pests, and the likes. The gardener says, “I’m learning every day and I believe that I’ll forever be a student of nature.” He reads books, researches online, watches vlogs, and listens to farming podcasts. In the future, Ticsay plans to increase their harvests by growing more fruits and veggies to lessen their dependence on food from the stores and to make his family healthier by eating naturally grown produce from their backyard. 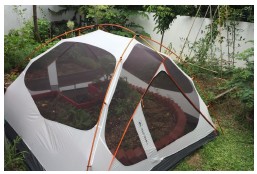