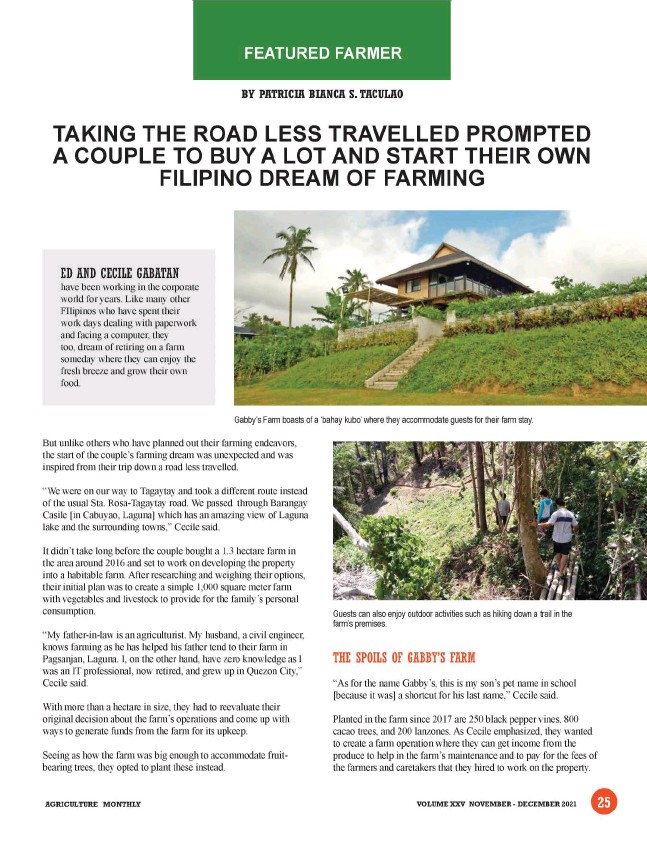 Little did Ed and Cecile Gabatan know that taking a detour on the way to Tagaytay would result in their owning and running a farm. Now, Gabby's Farm grows balck pepper, cacao, and lanzones, and is a source of delight for everyone in the family. But unlike others who have planned out their farming endeavors, the start of the couple's farming dream was unexpected and was inspired from their trip down a road less travelled. "We were on our way to Tagaytay and took a different route instead of the usual Sta. Rosa-Tagaytay road. We passed through Barangay Casile [in Cabuyao, Laguna] which has an amazing view of Laguna lake and the surrounding towns," Cecile said. It didn't take long before the couple bought a 1.3 hectare farm in the area around 2016 and set to work on developing the property into a habitable farm. After researching and weighing their options, their initial plan was to create a simple 1,000 square meter farm with vegetables and livestock to provide for the family's personal consumption. "My father-in-law is an agriculturist. My husband, a civil engineer, knows farming as he has helped his father tend to their farm in Pagsanjan, Laguna. I, on the other hand, have zero knowledge as I was an IT professional, now retired, and grew up in Quezon City," Cecile said. With more than a hectare in size, they had to reevaluate their original decision about the farm's operations and come up with ways to generate funds from the farm for its upkeep. Seeing as how the farm was big enough to accommodate fruitbearing trees, they opted to plant these instead. THE SPOILS OF GABBY'S FARM "As for the name Gabby's, this is my son's pet name in school [because it was] a shortcut for his last name," Cecile said. Planted in the farm since 2017 are 250 black pepper vines, 800 cacao trees, and 200 lanzones. As Cecile emphasized, they wanted to create a farm operation where they can get income from the produce to help in the farm's maintenance and to pay for the fees of the farmers and caretakers that they hired to work on the property.