We’ve all heard about how Wuhan in China became the epicenter for the COVID-19 pandemic, as it was there that SARS-COV-2 spread out into the world. However, did you know that the COVID-19 pandemic – and other similar diseases – may have had its origins in farmed animals? BREEDING AND EVOLUTION Professor Cock Van Oosterhout, in a 2021 editorial in the journal Virulence, has theorized and warned readers that the process of breeding livestock is being outpaced by the evolution of parasites – including viruses – thanks to a lack of genetic diversity. This makes livestock potential breeding tanks for future infectious diseases that will be able to jump the barrier between animals and humans. Fortunately, all is not lost. There are still ways where humanity can prevent the rise of other infectious diseases through the industrial weak point of livestock. CONTROLLING TRAVEL In the case of COVID-19, we’ve seen how global travel has helped spread the virus. This is one way we can stop mutations from happening in potentially pandemic diseases: Stop travel to limit mutations that will happen as viruses cross over into various populations. This applies not only to humans, but to animals as well. Sad as it may seem, it may be that compulsive vaccinations and vaccine passports will be here to stay to prevent humans from infecting various livestock with viruses and giving rise to new mutations. IDENTIFY WHICH CAME FROM WHAT It’s important to keep track of animal populations and the diseases that are inherent in them. That way, if mutations happen, measures can be taken before a disease can make a significant crossover to another species – or humans. LESSEN PROTEIN PRODUCTION The ugly truth is, human civilization is built-in mass food production, which is now unsustainable on many levels. Because of the closeness of current livestock animals in terms of relative genetic similarities (as compared to, say, fish), it’s easier for diseases to cross over. If humanity wants to cut down on the breeding grounds for viruses, then one big solution would be to cut down on (or completely eliminate -Ed.) livestock output, and switch to other agricultural products which are not animal-based. THE IMPACT OF MASS PRODUCTION Mass production in the form of factory farming has many “bad habits” in itself, which likely contribute to the creation of more diseases. In a report from Proveg, an international food awareness organization, they claim that 75% of all emerging infectious diseases have come from animals, both from wild animals (which, they assume, happened with COVID-19), and from farmed animals, as is the case in avian and swine flu. Proveg also wrote in their report that the preference for meat, eggs and other dairy products as major food sources is the source of close-contact issues between humans and animals, as mass-production farming puts more animals into the same amount of space available. By the same token, more animal habitats are also being invaded due to the need to expand mass-production operations, according to a 2020 article by Flora Southey for Food Navigator. 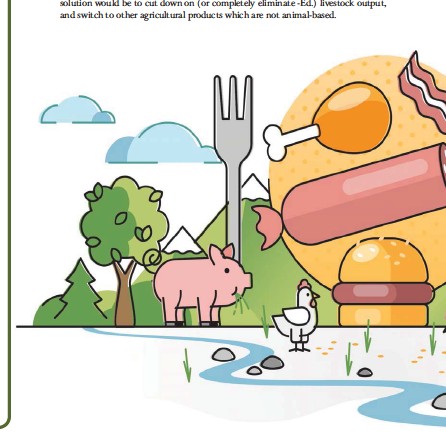 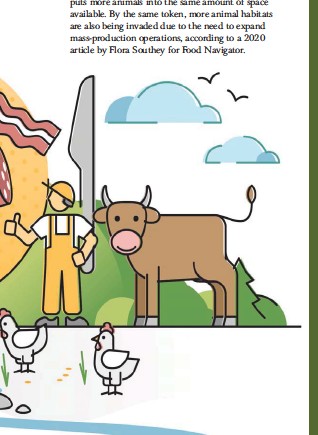