Ionce wrote a story of my visit to El Nido on March 2021 and my encounter with the lovable Rockskipper and its neighbor, the Lined Shore Crab. Having enjoyed our time there, we planned an encore El Nido trip a month later. We dragged along my parents, together with my brothers and their families. Knowing the bustling wildlife nightlife on the beach after sundown, we visited two beach locations on separate nights for the three days that we stayed there – first, at Buko Beach Resort of Sitio Lugadia, Barangay Corong-corong, El Nido, then at Maremegmeg Beach Club in the same barangay. We had no specific criteria for choosing these locations. It just so happened that only those two resorts could accommodate our big group at that time, considering the social distancing and crowd reduction requirements. Each resort hosted about half of our group. This turned out to be a good thing, because both resorts provided worthy accommodations and their beach proved to be rich in wildlife. We spent our first night in Buko Beach Resort, and the next at Maremegmeg Beach Club. I planned ahead for the night trip, bringing with me two generic waterproof flashlights and extra batteries, just in case. Naturally, the trusty cellphone was a must. It enabled me to call for backup, it had its own camera, and the built-in flashlight had been useful in many occasions. My fine net with handle was ideal for those scenarios. They are similar to the ones you would usually use for your aquariums, except that I tripled the depth of my net. so that the captured animal won’t jump out, although many of my quarry are still able to do so and escape. The deep net also provides more cushion for the animal, thus reducing chances of injury. As I readied our tools, my lovely wife readied our travel permits and QR code. You would think that we were going abroad with all the document preparations, but we were actually just going to have a four-hour road trip to El Nido 270 kilometers from our house. I would like to assure our readers that all of the specimens caught during this trip, and even those from the March 2021 trip, were released back into the water after the picture taking. I also tried to educate my army of pamangkins concerning these creatures before releasing them back into the water. 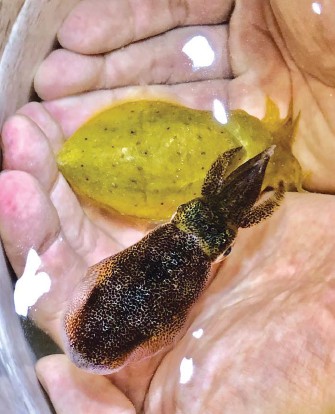 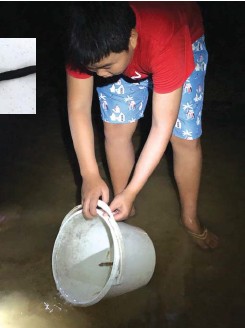