Our night trip would usually last two to three hours at a time. Once we started to see interesting animals sleeping or swimming about, it was hard to resist the urge to keep looking for more. We were very fortunate that it was low tide on this particular night in Buko Beach Resort. We always saw more sea creatures during low tide because, instead of waiting for them to approach shore (many creatures were attracted to the light), we could go far wading in the water without having to swim. I was with my kids and pamangkins, so getting our clothes wet was not an option. Otherwise, I would be grounded by their mommies. So, we had to keep it basic: maximum depth at knee-deep water and wrap up by 10 PM. We were not seeing anything interesting at first. It was not that we were not enjoying ourselves. There were a lot of small, inch-long fishes that were either sleeping or blinded by the light, so you could actually snatch them out of the water by hand like a Kung Fu master. A good number of Suahe could also be scooped up with a net.the bigger creatures (three inches and bigger) were more skittish and harder to catch. Although they were partially blinded by the light, they kept on moving and would dash away when they detected movement. We were able to catch two different species of needlefish, with the biggest measuring to 7inches long I was about to call it a night when I noticed a strange shadow floating nearby. I was intrigued that this object seemed to be floating in a pattern rather than just floating with the current. It approached me as I walked farther away, but it kept a certain distance when I tried to approach it. As I focused the beam of my flashlight on it, I finally figured out that this object was actually a juvenile squid about 5 inches long. Just like many other creatures, it was drawn towards our light, but it was very cautious. It approached us very gradually to observe what was happening. I focused my beam into its eyes, hoping that it would not notice my advance. To no surprise, it was smart and apprehensive. Its jet-like propulsion allowed it to dash off every time I made sudden movements. As I got closer, it could sense my presence and it made a threatening stance by shaping its tentacles to look like a two-pronged pitchfork. The sight was truly cute for such a small creature, but at the same time, effectively threatening. While I knew that it could not harm me in any way, the shadowy fork figure and the false aggressiveness could really make one hesitate. 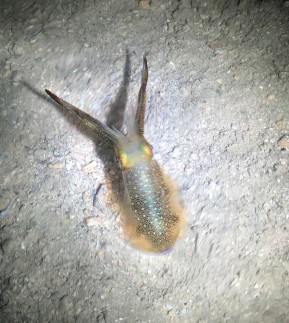