Eventually, squidy could no longer resist the light. I got close enough and tried to scoop it up with my net. The first attempt was not successful because it noticed my movement. I thought I lost it because it left a dense cloud of ink, which I initially mistook for my quarry, while the actual squid swam off to a few meters away. It was not able to swim far because the tide was very low and mounds of sand and big rocks created obstacles for a quick escape. If I were a sea predator like a fish, the ink goo would be between me and the escaping prey, and this would have easily confused me and I would either lose sight of the prey or lose my bearings. Remember that in the water, movement is not limited to only Northsouth-east-west, but also up, down and all the diagonals in between. I was extra careful the second time around, before my quarry became too smart to catch. Cephalopods, such as squid, cuttlefish, and octopus, are considered to be the smartest of the invertebrates. I have personal experiences of being outsmarted by them, of them escaping me when I thought I already had them in the bag. They learn quickly through observation and experience, which makes them really smart, considering that they only live for a year or two. As commented on a documentary, if cephalopods can live the lifespan of a human being, they would be at the top of the food chain. I thank God that he did not make this so. I do not want to be a squid’s sashimi. I had to be a lot more patient. I tried to stay on the deeper side of the water, blocking its potential escape. The key was not to lose sight of it, even though it tried to keep a wider distance between us. After a few minutes of stalking, the squid finally got tired of swimming away and could no longer resist the lure of the light. With a quick motion, I scooped it up with my net. I excitedly called my kids and pamangkins to see this special catch, but they could not see anything because the squid filled the net with gooey ink. I had to clean my fish pail a few times. I also had to release the small fishes that we got earlier because the ink seemed to be suffocating them. After a few rounds of pail-washing, the squid ammo was finally depleted. The kids could finally observe this curious animal. It was really a sight to behold. It could change color instantly, from the glass-like hue while inside the pail to almost black when I put my hand beneath it. Before it was caught, it was glimmering. I was not sure if it was really bioluminescent on its own or if it was reflecting off light. After the show and tell with the pamangkins, I went back to the water to wash the ink goo off my net. This time, I noticed a queer orange tennis ball floating in mid depth of the shallow water. It was staying close to a cluster of sea weed. My lengthy experience of appreciating wildlife has taught me to recognize if an object was either moving or staying still in a suspicious manner. This is usually the case for camouflage animals. As they mimic their surroundings, there are a few details that they cannot completely copy. These little details can give them away, if one is able to observe very carefully. As I drew closer, my heart rate began to speed up that I could feel a thumping sensation in my head. I realized that this “tennis ball” was actually a yellow-orange cuttlefish, a beautiful little fellow that is sometimes yellow, sometimes orange and sometimes yellow-orange. 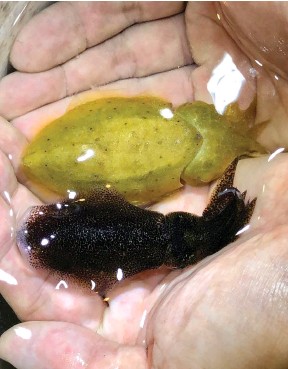