Based on my experience, cuttlefish encounters are rarer than squid but are easier to catch. Let me rephrase that: Maybe cuttlefish encounters are rarer because they are masters of camouflage, while the common reef squid travel in bigger numbers and are always in the open. Squid are harder to catch because there are in the open water and rely not only on camouflage but also on their relatively faster swimming to get them out of reach. I cannot catch the squid if I do not have my nets or fishing equipment. Meanwhile, the cuttlefish have far better disguise mechanism. Like the octopus, you would not know they are there. Just a week ago in another beach location, I noticed that a clump of seaweed was actually a good-sized cuttlefish that would have weighed almost a kilogram. However, this superior skill of camouflage was also the cuttlefish’s downfall. Their confidence in this ability would cause them to become easy prey for spearfishing and netting. I have encountered a pair of really big cuttlefishes a few years ago while snorkeling in the reef of Arena Island, Narra, Palawan. The area was protected from local fishermen and the sea life was just incredibly abundant. They were truly magnificent to swim with and with our initial approach, they did not swim away. Only when they realized that their camouflage was not working against us did they start to keep a safe distance. I was glad they resided in this particular reef and I did not have to worry for their safety. These impressive specimens would weigh somewhere between 2 and 3 kilograms each and that would make any fisherman go crazy. It was already past 10 PM and the kids were already getting sleepy [photo: Assorted specimen 1a]. The lesson time for the kids had ended. My back, neck, and eyes were sore from walking around all night with my body and neck bent towards the water and with my eyes staring almost unblinkingly for more than two hours. It was time to release everything back into the water. The Suahe skittered away and disappeared quickly. That was because they buried themselves in the soft sand. The fishes swam away slowly. They were dazed by the sudden change in brightness and the swaying of the pail as we brought it close to the water. The squid did something interesting. It moved in a slow but calculated speed away from us. When we raised our flashlight to see it clearly, it went back to its pitchfork defensive stance. As for the cuttlefish… you guessed it! It swam away timidly. 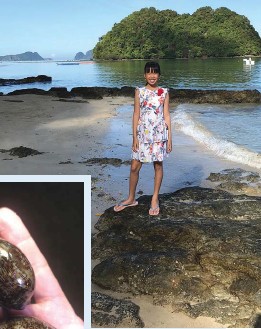 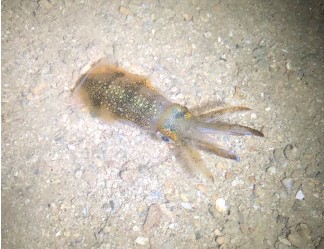