Not too long ago, the American Rabbit Breeders Association, Inc. (ARBA) gave acknowledgment to a Filipino: Jaime “Jimi” Lim of Sugar N’ Spice Rabbitry and Caviary has successfully raised all 49 rabbit breeds recognized by the association. “It’s really an achievement to be given the recognition,” said Lim. It did not come easy; it took time and effort before he could complete the list. Getting access was already a difficult task, but what he found even more challenging was ensuring that the rabbits remained healthy and cared for so that they could continue mating and reproducing. Lim shared that at first, he had no plans of fulfilling the tally. But he realized that he already had half of the rabbits recognized by the association, so he might as well push through with the rest. He had been caring for animals since the ‘80s – first, he raised pigeons, then he went on toe care for fancy chickens. Lim started with the smaller rabbits, such as Holland Lops, Netherland Dwarfs, and Lionheads. More recently, he welcomed the Argente Brun and Britannia Petite. Lim also has other rabbits not included in the ARBA list, such as Saarland, Vienna White, Black and Tan, Schow Polish, Czech Frosty, Belgian Giant, and Harlequin Dwarf. Out of all of these, he mentioned that his favorite is the Flemish Giant, which he found challenging to raise – he initially thought that smaller rabbits would be more challenging. When asked about the best part of his current achievement, Lim answered that it was being able to share his interest with various people. “I can share [my interest and passion] with more people and more groups.” He also said, “Kailangan [ng] tiyaga (Patience is necessary).” His advice was to focus on one type of rabbit at a time to ensure that one would be able to give them the best possible care. 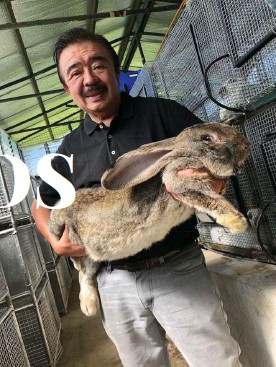 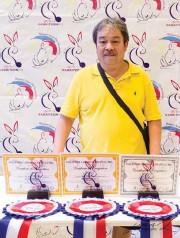 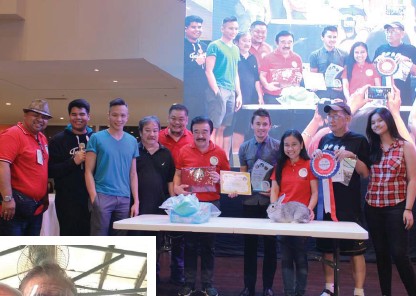