That was not the first time that I encountered a juvenile cuttlefish. I actually discovered a clump of cuttlefish eggs earlier this year that were near hatching. I could see the tiny cuttlefishes somersaulting within each of their almost crystal clear egg case. I also caught bigger specimens in shallow waters before, one of them about 10 inches from tip to tip.similar to my previous experiences, this one also relied too much on its camouflage and did not swim away when I approached it. I gently coaxed it to enter my net with my free hand and, without causing any fuss, it went in. Only when I lifted the net did it begin to panic and performed another inkfest. I am not really sure if this specimen from Buko Beach Resort is a common cuttlefish, because unlike the others I had seen, which adapted the color brown or grey most of the time, this one was always yellow or orange. It only appeared brown when the light was dimmed. I kept the transfer to the pail as quick as possible, so I was not able to get a good picture of it out of water. It looked very cute. Because of its bulging eyes, its head and tentacles looked like a sad puppy’s face. In other angles, it looked like a person’s hand with eyes drawn on the knuckles The cuttlefish had a calmer demeanor than the squid. While it didn’t struggle or fight me off, I had to remember to be very careful in handling the little guy. While it was inside the pail being watched by my platoon of nieces and nephews, it stayed timidly at the bottom of the pail, waiting for all the excitement to pan out. It did not fill my pail with gooey ink like what the squid did. I guess that is the word I am looking for to describe all the cuttlefish that I have come across: timid. 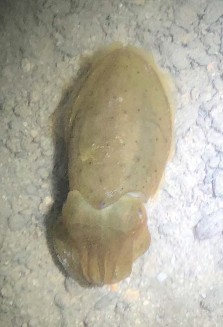 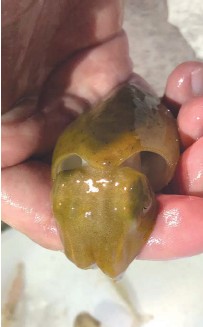