OWLS: MONSTERS OF THE NIGHT?

It’s actually hard not to imagine an Owl – or the hooting sound of one – as a perfect opener for B-movies under the horror genre and Halloween-oriented TV specials. But why are owls so heavily connected to Halloween? According to Adrienne Mayor, a professor from Stanford University who specializes in folklore and ancient history, Owls have always had a dark reputation: “As fierce, nocturnal flying predators, owls have been associated with witches, who also fly about at night doing dark deeds… nighttime was scary for humans, a time for werewolves, witches, demons of darkness, bats and black cats, and ghosts.” Mayor went on to explain that the Owl’s unsavory reputation goes back to Greek and Roman mythology, with the Strix, a Bird-like witch who hunted nocturnall and favored humans, particularly children, as part of their diet. She believes that the Strix were based on Owls, and, in turn, a genus of owls were named Strix, according to Joan Carson’s 2018 article for Kitsap Sun. In the end, it seems that Owls, being nocturnal flying predators – and some of them are surprisingly big! – have become the perfect Halloween animals. 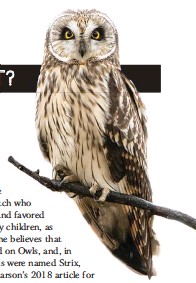