BATS: FLYING OUT OF THE MOUTHS OF HELL

Bats – yes, they are one species also linked deeply to the Halloween imagery. However, most Bats tend to be mostly harmless to humans. Some of the characteristics of Bats really dovetail into the natural fears of humans. For one, they are active at night, and even worse, many Bat species tend to roost in caves, which have their symbolic connections to death and the afterlife. It also does not help that their mating season is usually around September to November – around the time of Halloween – and in these cases, they tend to swarm. Finally, some species of Bats do actually feed on blood, though most of them prefer blood from Goats and Birds rather than humans. 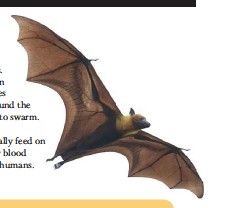