A FABLE FOR IGNORANCE

While I was still thinking of a name for my column, I chanced upon Ivan Krylov’s 1814 fable titled The Inquisitive Man. In the story, a man entered the museum and immediately saw tiny objects shaped like animals but failed to notice the largest attraction in the establishment: an Elephant in the middle of the room. Many writers after Krylov, including popular novelists Fyodor Dostoevsky and Mark Twain, incorporated this metaphor into their work. Twain wrote about two detectives searching for a white Elephant who, all that time, had been right where the animal was supposed to be. In 1959, The New York Times used the phrase “the elephant in the room,” popularizing the metaphor we now use today. So, why use it as the name of this column? I feel that in many ways, animal use is the Elephant in the room. It is the most apparent anomaly, yet people fail to recognize its significance. What do you think will happen when the single most important thing about an issue is ignored by everyone? Just like in films, the world comes crashing down. 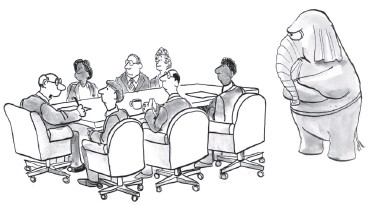