TOO LOUD TO BE HEARD

Disaster and pandemic movies are a staple for any ‘90s or 2000s kid. I grew up scared of volcanoes and lakes because of Dante’s Peak (1997), wary of wild animals because of Outbreak (1995), anxious of strange weather because of The Day After Tomorrow (2004), and thinking twice about entering dilapidated buildings because of Quarantine (2008). Except for Quarantine, there seemed to be a pattern in these movies: A scientist is being ignored. In Dante’s Peak, the protagonist volcanologist knew that an eruption was imminent. Instead of being allowed to warn citizens who lived around the mountain, he was silenced until it was too late. In Outbreak, a chief virologist’s early warning of a deadly virus capable of causing a contagion was also ignored. And in The Day After Tomorrow, a team of scientists who were warning the government for years of the catastrophic effects of climate change remained unheard up until the last minute. An iconic conversation among scientists and a park owner in the 1993 Jurassic Park film sums up the sentiment behind disaster and pandemic films. In this particular scene, doctors Alan Grant, Ellie Sattler, and Ian Malcolm were conversing with park owner John Hammond about the grand opening when prehistoric dinosaurs would be “resurrected” using previously found DNA. While recognizing the power of science and its capability to make great changes, the doctors warned the billionaire of the risk of allowing dinosaurs, the former dominant creatures of the planet, to roam with humans. This particular line by Dr. Malcolm struck me: “Your scientists were so preoccupied with whether they could, they didn’t stop to think if they should.” 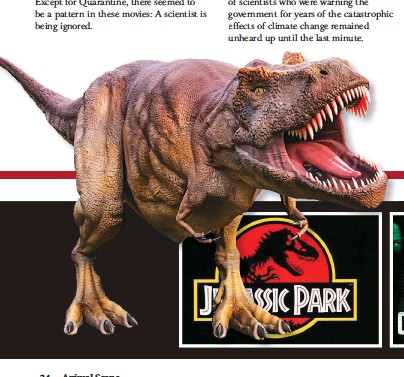