In the movie: A wealthy San Francisco socialite pursues a potential boyfriend to a small Northern California town, where things slowly take a turn for the bizarre after Birds of all kinds begin to attack people. In real life: Although there have been instances of Birds attacking humans, it is rare for these incidents to involve non-predatory ones, as in the movie. Though the film was adapted from a short story by Daphne de Mauirier, the director Alfred Hitchcock also took inspiration from a 1961 incident in California wherein thousands of Seabirds hurled themselves into residents’ homes and on the streets. Fifty years later, scientists discovered that the Birds had ingested toxic algae that disoriented them, causing them to crash into homes – which was sad rather than scary. Apart from the inconvenience of getting the occasional Bird droppings on your head, they are harmless and pretty cool, being the colorful pollinators and seed spreaders that they are. 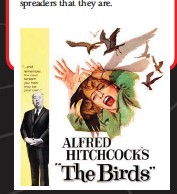