In the movie: A quadriplegic man has a trained Monkey helping him with his paralysis, until the little Monkey begins to develop feelings – including rage – against his new master. In real life: Monkeys don’t belong in human homes, let alone become service animals. They have it pretty bad, too, as they are often used in vivisection. And as with other animals on this list, they don’t attack humans unless they feel threatened or provoked. Though humans often need saving from primates in movies, Monkeys are actually the ones who need saving in real life. 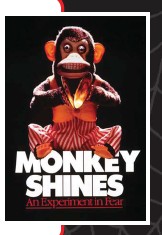