In the movie: A species of South American killer Spiders hitches a lift to the U.S. in a coffin and starts to breed and kill. In real life: Spiders rarely attack humans on purpose. On the rare occasion that they do, like many animals, it is because they feel they are in danger. The eight-legged crawlies are usually chill. Spiders also play a critical role in the ecosystem, and keeping insect population in control is one of them. Without Spiders, there would also be no inspiration for Spiderman. And what kind of world would that be if we didn’t have our friendly neighborhood superhero? 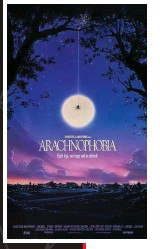