According to write-ups in the Game and Wildlife Conservation Front and The Wildlife Thrust webpages, Flower Crab Spiders are only one of 27 species of Crab Spiders and can actually change their color to match their flower perch “so long as [they are] on a spectrum between pale green, yellow, white, and pale pink.” This would explain how in the past, I had found them on yellow, pink, and whitish flowers. However, only female Spiders, who are larger than the males, can effect such a color change. Apparently, it can take three weeks for Crab Spiders to change color should they switch flowers, their bodies producing pigments that match the new surroundings. The Spiders, researchers concluded, must be able to “see” their surroundings in order to assess the color, and indeed during an experiment it was discovered that Crab Spiders whose eyes were painted over lost the ability to change color to match surroundings. (Such a cruel experiment! -Ed.) 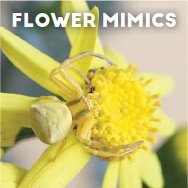