FISH IN YOUR TANK

The body and fins of the A. grunniens are covered by a camouflaged pattern of light and dark brown blotches. They also have a lot of weed-like appendages around the mouth, face, head, and body to conceal them even further. They look like a piece of wood or rock with some kind of vegetation on it. They mostly just sit at the bottom and hidden from view. With a wide mouth and large eyes, you can deduce that this is an ambush predator who simply waits at the bottom for an unsuspecting prey to swim by. They move slowly and most of the time stay motionless. Their movement is best described as a waddle more than a swim, and their movement is a short hop of a few inches. But if danger arises, they are able to dart quickly to escape. You might find them zipping across the tank while making the grunting sounds, panicking to escape your fish net if you’re trying to isolate them during tank cleaning. 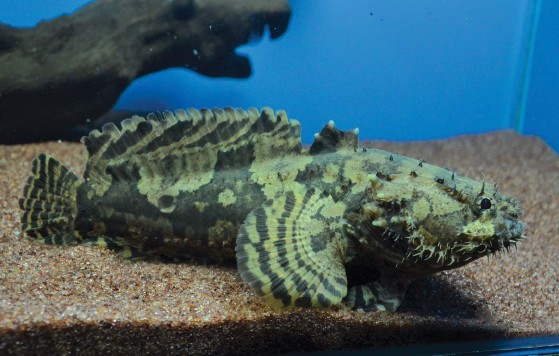