I would later find out from some nature books in our school library that, unlike other arachnids which wrap their prey in silk for later consumption, Crab Spiders immediately feed upon their prey without enveloping them. Also unlike many of their kind, Crab Spiders do not spin a web in which to trap their food, depending entirely on stealth and camouflage to secure a meal. They also leave their prey largely intact, draining bodily fluids through the two minuscule holes left by their fangs. After feeding, the Spider usually lets the now-drained insect fall, which was how I discovered that the easiest way to find a Crab Spider was to look for the small pile of insect carcasses that sometimes collect at the base of the plants on which they are perched. 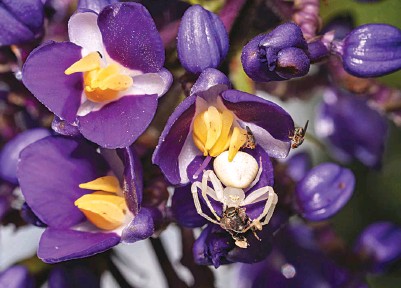