AFRICAN LION HOUND The breed is known as the African Lion Hound because of their history in helping hunt and track lions in the savannah. FAST RUNNER A proven excellent hunter, the Rhodesian Ridgeback can also run fast enough to keep up with some of the fastest dog breeds too. ONE COLOR Rhodesian Ridgeback Dogs only come in one color: wheaten. Their coats that appear as varied colors are actually just shades of this one color. STAR POWER The famous movie star and Hollywood matinee idol Errol Flynn was one of the first to care for Rhodesian Ridgebacks in the United States in the 1930s. REGISTERED SIGHTHOUND The breed was first registered by the South African Kennel Club (SAKU) on February 4, 1926 and was admitted into the American Kennel Club in 1955 as a member of the Hound Group. The Rhodesian Ridgeback was officially recognized as a sighthound in the 1980s. 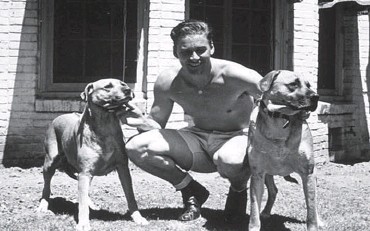