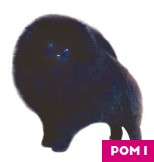 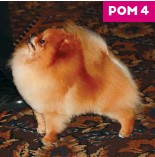 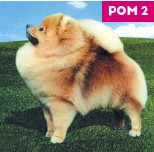 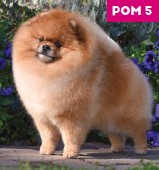 AS: Tell us more about the strengths of your breeding program, and whether or not you get professional help to manage it. CP: I believe that the strength of my breeding is the bloodline upon which it is based. Mine is focused on my own stud dogs, of seven generations of continuous Best in Show (two generations of which came from outside males, while five come from my own stud dogs). I started initially line-breeding on Eng Ch Derronill’smaxamillion, and when I outcrossed this linebred bitch to a black dog called Am Ch Valcopywakham Valentino, it produced the following. Am Ch Ph HOF Canton the Gigolo. This is the beginning of my line of Best in Show dogs. (POM 1) The above was followed by his son, Ph HOF Canton Braveheart… (POM 2) …Who was then followed by his son, Am Th Ch Ph HOF Canton Bravestar. He finished his Thailand title in one weekend at the prestigious Impact Show, with Best in Shows and Reserve Best in Shows. (POM 3) Then, he was followed by his son, Am Gr Ch It Ch Canton Jet Li, who was Best of Breed at the American Pomeranian Club Nationals 2013. (POM 4) The above was followed by his son, Am Ph Gr Ch Canton Fearless, who was awarded by the American Pomeranian Club as #1 Pomeranian (Breed) for 2018 in USA, with Best in Show All Breed, Multiple Best in Show Specialty, Multiple Toy Group Winner in USA, Best of Breed 2018 AKC Nationals Championship Dog Show in Orlando (sponsored by Royal Canin), Award of Merit at the 2018 APC Nationals in Louisville and Select Dog at Westminster 2018 in New York, and Select Dog at the 2018 APC Nationals. He is presently the producer of several American and Philippine Champions and Grand Champions. (POM 5) I have staff who work and manage my kennel with a vet consultant. I need to work to feed my dogs. AS: How do you deal with the shows? Do you get help from professional handlers and trainers? CP: I have staff who do the training in-house. He shows my Poms in the Philippine ring and sometimes abroad. I am in partnership with Mountain Crest, the number one Pomeranian breeder in the US. They show and represent me in the US. We use each other’s stud dogs, and our dogs go, back and forth. Several Pomeranian breeders in the US show my dogs, including Springwood and Sundown, while many others have expressed their interest. On some occasions, I have used professional handlers, but that is a very expensive option. AS: How do you explain your success in breeding? CP: I believe that the success in my breeding program lies in the continuous line-breeding of winning stud dogs with bitches. Inbreeding and line-breeding are essential for consistency. I stick to my own line and breed out to compatible lines at least every three generations to bring in hybrid vigor.