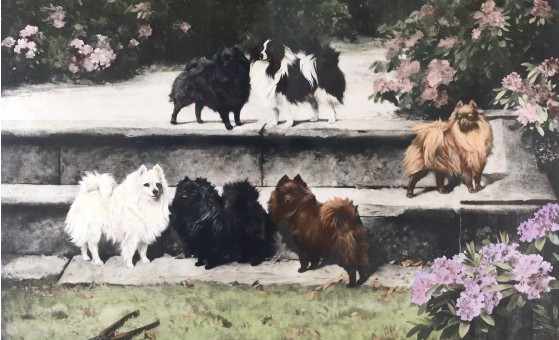 AS: Can you tell us more about Pomeranians of other colors? CP: Let’s begin with how UK Pomeranian champions looked during the turn of the 20th century. Observe that the colors included white, black, chocolate, and particolor. These were the original Pomeranian colors. I think orange was popularized in the ‘50s, causing the other colors to die a natural death when people lost interest. Then, there were the reds, red sables, and cream sables of the English Hadleighs. Hence the term ROCS(REDS Oranges Creams Sables) is one of the two classification in the APC Nationals. The original colors were then resurrected to popularity: the whites of Frank Hsieh’s Chiao Li Ya Pomeranians; the blacks popularized in the US by Diane Finch’s Ch Finch He Walks in Water, found in a lot of pedigrees worldwide, plus the blacks of the UK winning Poms, although the name escapes me; the chocolates, including Am Ch Heartland’s In the Nickatime, and one of the top winner Pomeranians of all time, Parker, also known as Am Ch Pufpride Sweet Dreams, who was a deep red but was a chocolate carrier who produced chocolates himself; and lastly, the particolors, who are being resurrected but not quite there yet. How was this done? By pulling out those recessive genes through selective test breeding and the Mendelian theory. More recently, everything was made easier through the use of DNA testing. It really depends on what standard you are using. Historically and up until present day, blacks and tans are not allowed by the KC standard, while they are perfectly alright according to the AKC standard. Merles have historically not been in the gene pool of Pomeranians, but decades ago, someone cheated, and it’s now in the gene pool. It is now acceptable in the US standard, but for political reasons, they sabotaged this color by inserting a DQ qualification for blue eyes. I think this is silly, because merles are supposed to have merle eyes, making one or both blue eyes. [There are also] the brindles, tricolors, lavenders, blues, and so on. They are all acceptable according to the AKC Standard.