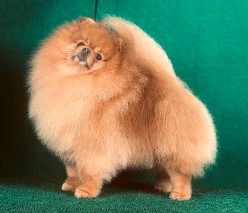 AS: Why are your Pomeranians unlike many of the ones seen elsewhere who have big heads, big legs, and thick coats? CP: Each breed has a breed bible, referred to as the standard. This standard lists specifications for the perfect Pomeranian. Certain countries and regions will have their own breed standard as well. For example, you have the AKC standard in the US. There is also the KC standard in the UK, and the FCI standard for most other countries in the world. Many of these standards are similar, but [there are a few differences]. Initially, the Pomeranians all over the world were based on the KC standard, wherein they were supposed to be fine-boned. Eventually, other countries, such as the US, started developing their own interpretation of what “bonier” meant, although it did not mean big-boned. The big-headed, big-boned Pom with soft cotton-ish coat is not the breed standard. In fact, these traits are very harmful to the breed, because they are [correlated to] dwarfism. These dogs are prone to BSD, wherein their coats fall off and do not grow back. This is a major fault in the AKC standard. The correct Pomeranian is well-balanced, medium-boned, with a wedge-shaped muzzle and a good stop. The expression should be a smiling face that looks alert and impish. AS: Pomeranians often have tails almost touching their heads. Are they all born this way? CP: The classic standard calls for a short coupled dog, but I believe the better term is a balanced dog. If they’re too short, there will be poor movement, oftentimes leading to crabbing. I [prefer] a high neck placement, with the head capable of moving like that of a cobra. The head is erect and held high, even when moving. This should not be confused with a long neck, which would bring the head down while moving. A high tail set laid flat on the back with long straight plumage going over the head is what I breed for. When they do not have this ideal, some grooming and presentation enhancements are done to achieve the look. This length of tail has been lost in many American Pomeranians today because of their presentation. With the ultra-sculptured look, the matching tail is cut short to keep the tail in place when moving. This has caused less focus on the desirable long plumage. I really do not agree with shortened tails. More recently, the natural look is being encouraged by the American Pomeranian Club and hopefully, we will see the longer plumes coming back in the American Pom scene. AS: Which is more important, genotype or phenotype? CP: I would follow both. Generally, when a female dog is in heat, I would look at the pedigree up to the grandparents and somehow try to line-breed from there. My favorite and best dogs come from half-brother, half-sister breeding, but I would do this really carefully and selectively. Most of the time. I would do uncle-niece, nephew-auntie, grandfather-granddaughter, and first-cousin breeding. Every three generations or so, I would do a total outcross. With a lot of choices from my breeding stock, I try to complement the choices by using similar types, with no common faults and with cementing virtues.