NEWLY DISCOVERED REPTILE MIGHT BE THE SMALLEST ONE YET 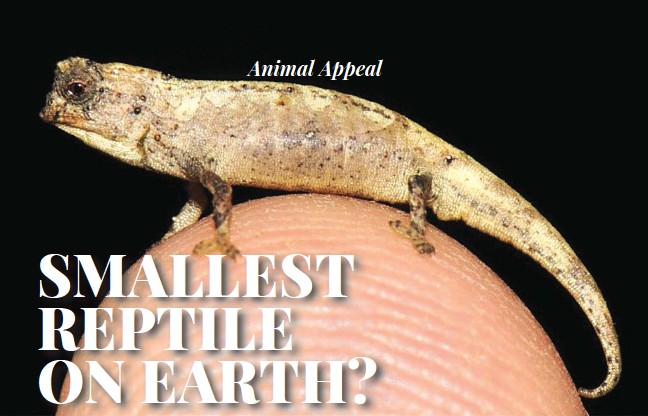 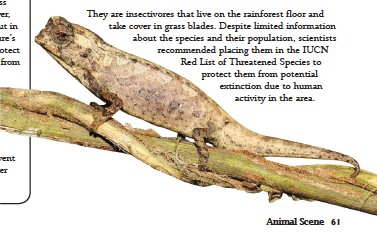 There is a newly discovered Chameleon species by a Germanmadagascan expedition team: the Nano Chameleon (Brookesia nana) found in northern Madagascar. This species is currently the smallest reptile to be discovered, and only a male and female pair were discovered thus far. HOW SMALL ARE NANO CHAMELEONS? The adult female measures 29 millimeters while the adult male is only 13.5 millimeters long. This makes them roughly about the size of sunflower seeds or the tip of your thumb. Scientists believe that they might be the smallest reptiles on earth among the 11,500 known species. However, only two specimens were found by the expedition team, and they were fully aware that there might be some size variations among individual animals. Nonetheless, this species broke the record of the formerly known smallest reptile in the world: the Micro Chameleon discovered in 2012. WHERE WERE THEY DISCOVERED? The Nano Chameleons were discovered by a German-madagascan expedition team in a mountain forest in the northern part of Madagascar. Their natural habitat is the rainforest floor with leaf litter and forest debris. This species defies the natural pattern of evolution wherein smalls species are said to be found on small islands. The Nano Chameleons were not found on a small island, and yet they experienced a unique case of extreme miniaturization that proves other factors might be at play. WHAT DO THEY EAT? Nano Chameleons hunt for small insects in the rainforest floor as they hide from predators in the forest floor debris. Their small size also plays a role in their survivability because they can hide from predators in blades of grass. Despite their extremely small size, Nano Chameleons remain insectivores, just like larger Chameleon species. IN A NUTSHELL The Nano Chameleon is a newly discovered species requiring further study to be completely understood. This species defies the natural pattern of adaptation since the habitat is not a small island that required extreme miniaturization for an animal to survive. They are insectivores that live on the rainforest floor and take cover in grass blades. Despite limited information about the species and their population, scientists recommended placing them in the IUCN Red List of Threatened Species to protect them from potential extinction due to human activity in the area.