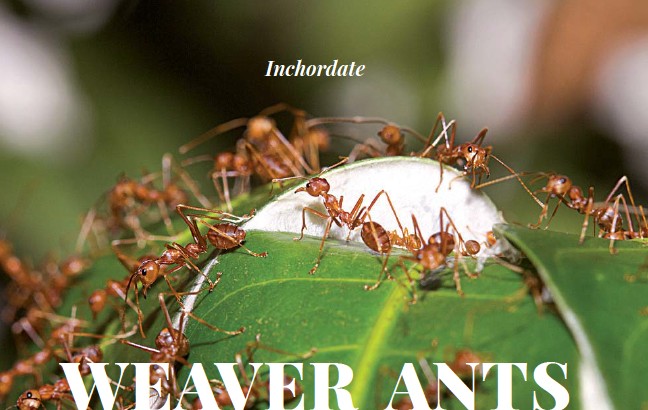 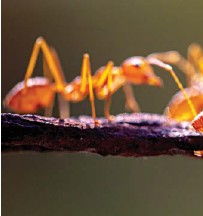 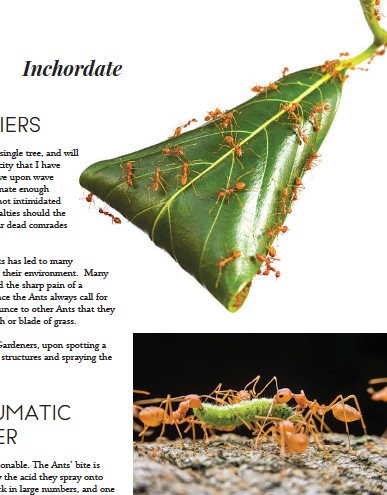 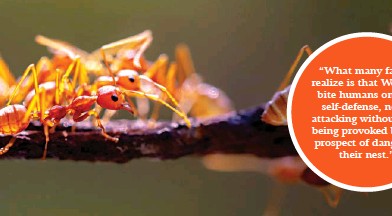 Acouple of times a year, the rambutan tree in our front yard needs to get its branches trimmed so that they don’t touch electrical wires or shed leaves on our roof. I rather dread this chore, not because I worry about falling out of the tree or injuring myself with a bolo, but because tiny creatures that have made the tree their home do not take too kindly to my chopping off parts of it. Fearlessly and relentlessly, they attack, knife-wielding me and, despite my best efforts to protect myself by wearing gloves, a jacket, and thick jeans, they manage to find exposed flesh, into which they sink their sharp mandibles. Once they’ve bitten, there is almost no way to shake them off. And so several times, I need to abandon my labor and pick their rice-grain-sized red bodies off my skin one by one. So go my twice-a-year struggles against the colony of Weaver Ants that have built their network of nests in our tree. THE ANTIK Oecophylla Smaragdina, the red Weaver Ant, (commonly called Hantik or Antik here in the Philippines) can be found in India, Southern China, Northern Australia, and all throughout Southeast Asia. They build their nests out of leaves in almost any type of tree. These nests are natural architectural marvels, the building of which requires remarkable coordination and communication between the individual insects. The Ants form living chains between the leaves by clambering on top of one another, and then the many individual insects simultaneously pull in a collective effort to bring them closer. This is an extraordinary feat of strength when one considers how light each Ant is. Another group of Ants then glues the leaves together using silk produced by the colony’s larvae which they squeeze out like toothpaste from a tube. Little by little, the builders form a many-layered leaf structure the size of a football to house the larvae and their queen. FIERCE SOLDIERS A large colony can build several of these nests in a single tree, and will defend them from any perceived threat with a ferocity that I have been unfortunate enough to have experienced. Wave upon wave of attacks is launched against any creature unfortunate enough to enter the Weaver’s territory. The defenders are not intimidated by size nor are they discouraged by mounting casualties should the invader fight back, climbing over the bodies of their dead comrades to meet the source of danger head on. The ferocity with which Weavers’ defend their nests has led to many unpleasant encounters with the humans who share their environment. Many people who frequent the outdoors have experienced the sharp pain of a Weaver’s bite (and it’s seldom just a single bite, since the Ants always call for reinforcements by releasing pheromones that announce to other Ants that they are under attack) after brushing up against a branch or blade of grass. This has made them unwelcome in many places. Gardeners, upon spotting a nest, are quick to evict its residents, tearing up the structures and spraying the Ants with insecticide. ALWAYS A TRAUMATIC ENCOUNTER This wariness of Weavers is, on a certain level, reasonable. The Ants’ bite is very painful on its own, and made even more so by the acid they spray onto the bitten area. Add to that the fact that they attack in large numbers, and one can understand why those who have been unlucky enough to have experienced a Weaver assault have a permanently sour impression of the species. What many fail to realize is that Weavers bite humans only in self-defense, never attacking without first being provoked by the prospect of danger to their nest. NATURE’S ALLY This negative attitude of many gardeners toward Weaver Ants is unfortunate as Weavers are predators of many Insects that can damage plants and can effectively reduce the need to use poisonous pesticides. Studies showed significant pest reduction in a number of fruit-bearing trees in which Weavers had established nests. An article stated that, “Oecophylla Ants provided the valuable ecosystem service of natural pest control to a diversity of tropical tree crops.” Records of Weaver Ants serving as a “natural biocontrol agent against agricultural pests” have been found in Chinese texts dating back to 304 BC. In Africa, scientists found that the Weaver may help farmers in fruit agriculture, particularly in culturing mango and cashew nut trees. A NURTURING SIDE Weaver Ants have a nurturing side as well. Like other species of Ants, they “farm” Aphids and other small Insects that produce honeydew, which they eat in addition to the other creatures upon which they prey. The Ants protect these Insects from potential predators and have been known to actually physically move their “livestock” to more fertile grazing areas that enable the farmed Insects to produce more food for their “shepherds.” LEAVING THEM BE For all their attributes, one still cannot overlook the fact that Weaver Ants can be dangerous, especially to small children and animals that may unwittingly enter their territory. And this is the image and reputation that has largely become ingrained in people’s minds since, as mentioned earlier, most encounters between human and Weaver are generally characterized by sudden and excruciating pain. After such an experience, it is understandable how upon discovering a Weaver Ant nest in one’s garden, one’s first instinct is to get rid of it. This is truly unfortunate as the presence of Weavers in a garden can reduce the presence of Caterpillars, Fruit Flies, and other Insects that can harm plants and fruit. While I cannot help but displace a nest on occasion when I prune the tree out front, I allow the rest of the nests to remain so the Hantik can continue to perform the environmental role they’ve been fulfilling for literally millions of years.