BALANGA, BATAAN — As part of the continuing Livelihood Improvement Program of the Department of Agriculture (DA), the provincial government of Bataan recently distributed 40 cows and carabaos to qualified farmers in the town of Abucay. The animal dispersal activity is meant to help augment the income of the farmers in all 12 municipalities and city in Bataan, especially those who have lost much because of the ill effects of the COVID-19 pandemic on the livelihood of the farmers. Under this program which started in 2017, the Office of the Provincial Veterinarian, led by Dr. Albert Venturina, has already made 613 farmers the beneficiaries of a total of 431 cows, 107 carabaos, and 75 horses, 316 of them received their allocation during the pandemic. Venturina said they are now directing their focus on the dispersion of draft horses to farmers and have made the towns of Dinalupihan, Abucay and Mariveles the venues for their pilot program. There were already 25 horses distributed for this purpose. He said that indigenous peoples are a priority for this program. The farmer-recipient pays the government back by way of returning the animal once it has already given birth. To qualify for the livelihood improvement program, the farmer must be capable to raise the animal and must be endorsed by the municipal agriculturist of municipal veterinarian. 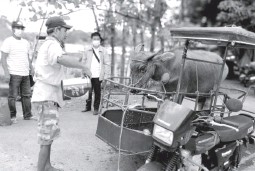