Jorge Edson Souza de Brito already got a sense of the country’s passion for volleyball when he joins the national women’s team coaching staff in July. The 54-year-old Brazilian mentor said he has heard many things about the country from a dear friend, former national team member Leila Barros, who became the darling of the frenzied local crowd when the Brazilian women’s team played in the FIVB World Grand Prix that the Philippines hosted in 2000. “Leila once told me that if ever it struck my mind to move elsewhere, I should be moving to the Philippines,” Souza de Brito said in an interview with the Philippine National Volleyball Federation (PNVF). Souza de Brito was not able to coach Barros when he joined the Brazilian women’s team coaching staff, but both played in the national team that won Olympic medals. Barros won two bronze medals at the 1996 Atlanta and 2000 Sydney Olympics while Souza de Brito won gold at the 1992 Barcelona Olympics. He was also part of the Brazilian team women’s coaching staff that won gold in the 2008 Beijing Olympics. The Brazilian mentor hopes his expertise would help improve the quality of the sport in the country when he joins PH women’s team coach Odjie Mamon and assistants Tai Bundit and Grace Antigua for the next two years. “(Winning the Olympic gold medal) was amazing. I can feel my body shaking. It’s a very special moment for all athletes,” he said. “I want to repeat that feeling again – in the Philippines, in the SEA Games.” PNVF president Tats Suzara said Mamon will select the 20member national team, which will be finalized hopefully this week. He, however, refused to comment on the issue of several star athletes missing last week’s tryouts. Souza de Brito, meanwhile, will be in charge with the team’s training program, where he describes his coaching style as between a “father and a monster.” “I could be the fatherly-type, but I want to push myself and the team, work hard to achieve goals,” said Souza de Brito, adding that he has already watched several videos of the PH team’s campaign in the 2019 Southeast Asian Games where the Filipina spikers placed fourth. Apart from the SEAG set late November in Vietnam, the team is being prepared for the Asian Women’s Championships that the country is expected to host in August. “We will try to get the best from what we can do and make a new page in history. It’s too early to make a change for the Asian Championship, but for November, it would be different,” he said. “Four months is actually not enough a time, but we’ll do our best, some changes will happen.” 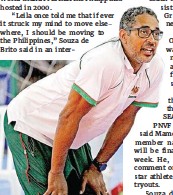