Gabe Norwood is hoping Jordan Clarkson would be available for Gilas Pilipinas when the country hosts the FIBA World Cup in 2023. The national team veteran said having Clarkson for FIBA’s centerpiece event will provide a big boost in Gilas’ bid to produce at least a solid finish on home soil. “Lord willing that happens and Lord willing he’s here,” Norwood said in a recent interview with One Sports’ The Game. “We’re hosting soon and I think that would be like the perfect situation for him to set foot in the country and play at home which he hasn’t done yet.” Clarkson has made known his desire to play for Gilas, particularly the 2023 World Cup, following his much-publicized debut in the 2018 Asian Games in Indonesia. But Clarkson also said the possibility of once again donning the Gilas uniform will depend if the situation presents itself given the rigorous work he’s done with the Utah Jazz in the NBA. Gilas fans are amped up about the likelihood since Clarkson has become a leading candidate for the NBA Sixth Man of the Year with his splendid play for the league-leading Jazz this season. “Just the combination of (Clarkson’s) energy, the crowd…hopefully we have a crowd that just ignites you and lightens up your game and the way he’s playing right now if he continues to get better he’s gonna put us in another level in terms of international play especially in Asia,” said Norwood. “But internationally, I think he just ups everyone’s game with the young talent that we have and that’s all those guys needed, that push,” he added. Norwood was one of Clarkson’s teammates during the latter’s much-publicized Philippine stint in the 2018 Asiad, even serving as the one who helped the NBA star get along with fellow Gilas players. 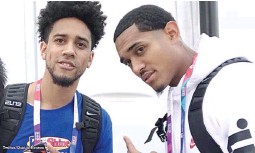