Warriors on track, Pelicans in peril

LOS ANGELES (AFP) — Stephen Curry erupted for 41 points as the Golden State Warriors stayed on course for a postseason berth with a 123-108 victory over the New Orleans Pelicans yesterday. Curry's 33rd 30-point game of the season helped the Warriors move to 33-32 to leave the team firmly in the hunt for a place in the play-in competition from the Western Conference. But the Warriors' road victory all but extinguished New Orleans' chances of reaching the playoffs. The defeat means the Pelicans are now languishing outside the play-in places with a 29-36 record, four games adrift of the San Antonio Spurs. Curry's latest masterclass in a season that has seen him emerge as a front-runner for NBA Most Valuable Player honours was his ninth 40-point game of the season, and the 47th 40-point game of his career. "I'm just playing with confidence," Curry said afterwards. "Every game I'm just trying to sustain the intensity, the effort and the focus. "It's been a fun year and a fun ride but we've got a lot left to do. I'm glad I'm playing my part." The Warriors led from start to finish, rocking the Pelicans by sprinting into a 39-21 lead at the end of the first quarter and stretching into a 25-point lead midway through the second quarter. "For us to come out like we did tonight in the first quarter and impose our will – it helped us maintain momentum throughout the game offensively," Curry told ESPN after the win. Curry was backed by Andrew Wiggins with 26 points while Draymond Green finished with a triple double with 10 points, 13 rebounds, and 15 assists. Pelicans star Zion Williamson led the New Orleans scorers with 32 points, with Brandon Ingram adding 19. Pelicans coach Stan Van Gundy blamed his team's sluggish first quarter performance for the loss. "The game was basically decided in the first quarter," Van Gundy said. "We were just in too big a hole. A frustrating night, disappointing night." Elsewhere, the Denver Nuggets clinched their place in the playoffs before their game against the Los Angeles Lakers after the Atlanta Hawks defeated the Portland Trail Blazers 123-114. The Nuggets join the Phoenix Suns, Utah Jazz and Los Angeles Clippers as the teams who have already punched their ticket to the playoffs from the Western Conference. In other games, Russell Westbrook laid on a remarkable 24 assists to complete his 32nd triple-double of the season in the Washington Wizards' 154-141 home defeat of the Indiana Pacers. Westbrook's latest triple – which also included 21 rebounds and 14 points – means he will average a triple-double for the season for the fourth time in his career. Wizards coach Scott Brooks said after the win he believes Westbrook is second only to Magic Johnson in the all-time point guard rankings. "I've been fortunate enough to see him for eight years do a lot of things that are pretty much superhuman at times," Brooks said. "Point guards don't do what he does. They aren't built that way. "There might be some that shoot better, there might be some that probably do certain things better. But there's nobody in the history of the game that can do what he does throughout the stat sheet. That guy is as high as level of a player this league has ever seen." Meanwhile, Anthony Davis scored 25 points as the Los Angeles Lakers bucked the absence of the ailing LeBron James to turn back the Denver Nuggets 93-89 at the Staples Center in Los Angeles. James sat out the game after aggravating a right ankle injury during a previous outing, a 121-114 loss to the Toronto Raptors where the Lakers superstar left for the locker room in the fourth quarter and didn’t come back. 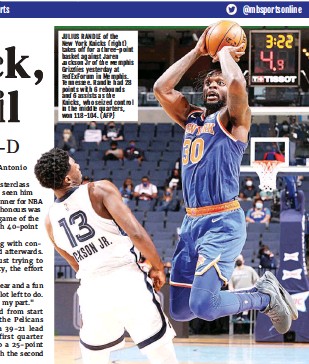