Jerald Napoles shares how he prepares for sexy scenes

I was able to ask awardwinning actress Angel Aquino who among the young stars in today’s generation would she want to team up with given the chance after her hit movie “Glorious” with young star Tony Labrusca. In the movie “Glorious,” Angel plays a 50-yearold woman who falls in love with a man half her age (Labrusca). “Jerald Napoles would be a good candidate given I get a project with a May-December plot again. I have watched his plays and I must say that his methodology and approach when it comes to his scenes are impressive. He is really an intense thespian, and he knows how to balance his energy with his fellow actors,” Angel tells Gossip Girl. Before Jerald’s presscon for his new movie “KAKA” with sexy actress Sunshine Guimary, I told Jerald what | < \ tered, “Angel is one of the most beautiful award-winning actresses that I admire. Words like that coming from her make me want to be a better actor.” His leading lady, Sunshine Guimary, shares the same sentiment with Angel especially after their steamy love scenes because she really felt the intensity in their scenes but the gentleness and professionalism of Napoles as an actor. “Sobrang galing ni Jerald. Dahil intense siya, hindi ako nahihiya to let go. Pero alam mo na nasa eksena ka kasi naka-sunod siya sa treatment at flow ni direk GB San Pedro. Disiplinado siya. ” (Jerald is very good. Because he is intense. I am not embarrassed to let go. But I am still aware I am in a scene because of him – he follows the treatment and  _  { I was very curious on how Jerald can “control” himself especially in terms of arousal given that he is with a very beautiful woman like Guimary, “This is not new to me. I had a lot of practice in theater. When I was younger, and it >  body and I was so embarrassed with my partner. She was an experienced theater actress, and she told me I will get the hang of it. On the following theater runs, I was able to control my body part’s with my mind, it’s all about mind-setting. And that is what I did during our scenes with Sunshine.” Kaka premieres on Vivamax on May 28. Vivamax is available online at web. vivamax.net. You can also download the app and subscribe via Google Play Store for android users and App Store for IOS users. 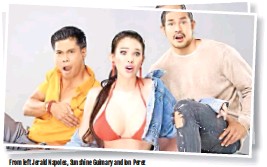