ANTON ALCANTARA & Sheena Caburog A few years ago, I made a checklist of whom I wanted to end up with— his characteristics, every little detail of the man I’d want to spend the rest of my life with. How his eyes would look, probably his smile, too, and his stance, among others. I wrote it on my novena book, alongside praying fervently that God would someday answer my prayer, and that is to end up with this man on that particular checklist. On the other hand, Anton, apparently was also praying for the woman he can grow old with. Praying and praying, to end up exactly with someone like me. Years have passed, we became to intertwined in this thing called life: I became busy with all the hustle— being in the wedding industry, maintaining a start-up company (Mayad Studios); and Anton, in his businesses. Love was nowhere to happen. But then God, in His very many amazing ways, made sure to sprinkle life with a little surprise. Anton and I met at that perfect time, when neither of us expected that we will meet each other. Call it fate, call it destiny. For us, it simply was just the right place at the right time. Meeting each other was God’s answered prayer, hence “GAP”, our term of endearment for each other, which literally meant God’s Answered Prayer. We originally planned our wedding to take place in Iloilo (my hometown), supposedly on March 20, 2021. Why March 20, 2021? Well, let’s just say Anton is the type of person who plans everything according to lucky dates and that date fell right in. But then, the pandemic happened; and it wasn’t going to get “better” anytime soon. Since we knew there would be no difference in terms of pandemic restrictions by March, we decided to do it earlier instead, in January 8, 2021, with the blessings of both our families. As it was a very intimate wedding, we chose a muted color scheme along the lines of green and champagne. We wanted to keep it to be minimalist, classic, and simple because we wanted people to feel relaxed; and as simple as it was— to just celebrate the beauty of getting married. No fuss, no frills. Naturally, the term “simple” ended up to be an understatement given that I am from the wedding industry; and having wedding suppliers for friends that doesn’t want to allow simplicity, everything was beyond what we planned, expected, and imagined. We couldn’t be any happier, nonetheless. It was a blessing yet again. We narrowed the guest list down to 25 pax. A very small number compared to the ones that we got used to. One reason was because of the pandemic— our priority was the safety of everyone who would be there to attend, and another reason was because we didn’t want anything grand since my family 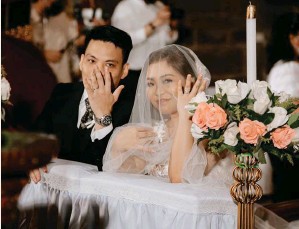 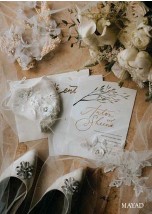